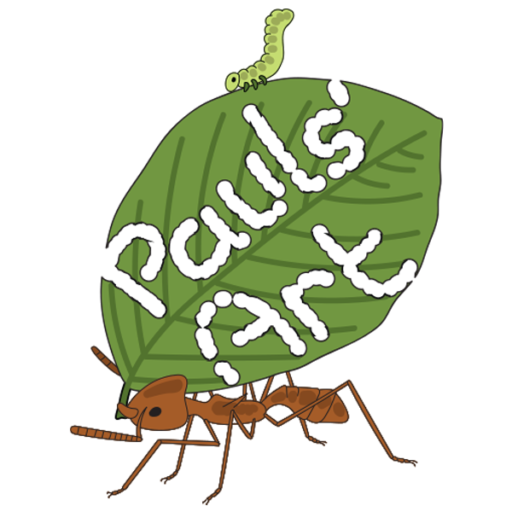 What is going on with our world? Some environmental impacts, like climate change, seem so large and abstract, that it is often difficult to see what we, as individuals can do about them.

But, we change the world in many more ways, often locally and perhaps more preventable, if only we knew what is going on. With these drawings, I like to explain how we affect our immediate surroundings. 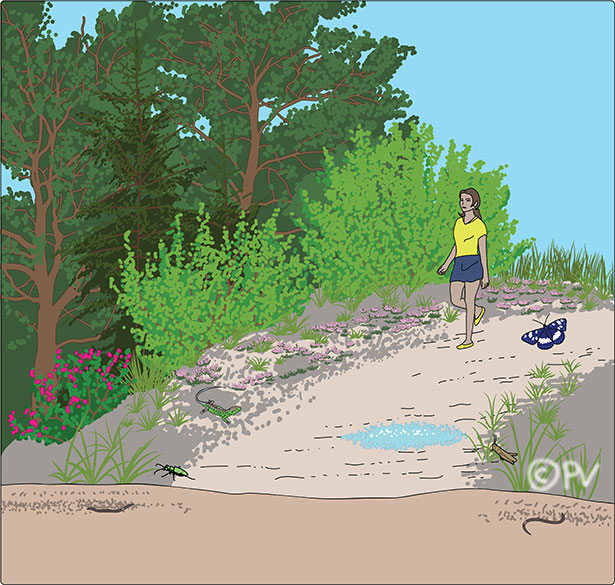 Years ago, I used to be teaching ecology, in the disguise of Wildlife Management. Sometimes, I made big drawings all over the blackboard to explain various human impacts. My students loved it!

Here, I have worked out a few of these “ecological explanations”  in colourful before-and-after drawings.

Birds help plants to escape from a garden

Plants do not always remain where they are planted. In fact, most species have developed ingenious ways to move to new places. Japanese barberry (Berberis thunbergii) uses birds for this purpose. This plant packs its seeds in a nutritious layer of bird food, which is called a berry. Birds eat these berries together with the seeds and spread the seeds with their faeces. Japanese barberry is a very common garden plant, which is increasingly commonly found in nature in Europe.
I made these drawings for an information plate, which we developed in the framework of project LIFE ARTEMIS. This plate is placed in Landscape park Tivoli, Rožnik and Šiška hill in Slovenia, at a place where we removed invasive Japanese barberry bushes during the project. 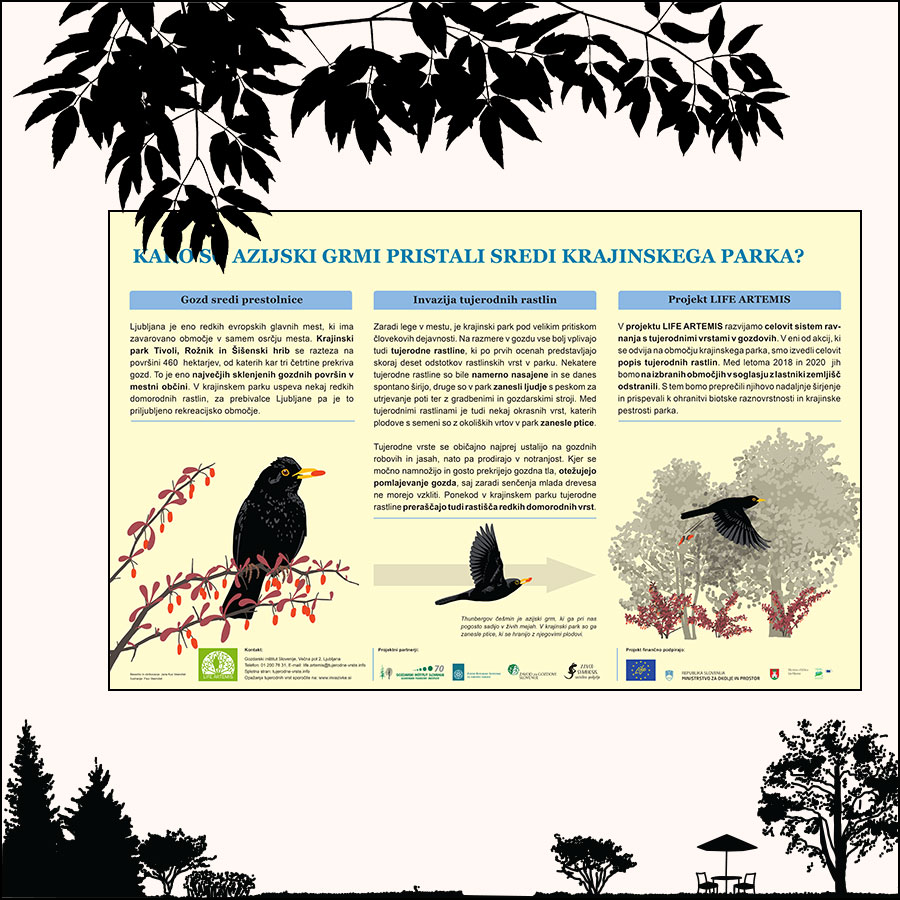 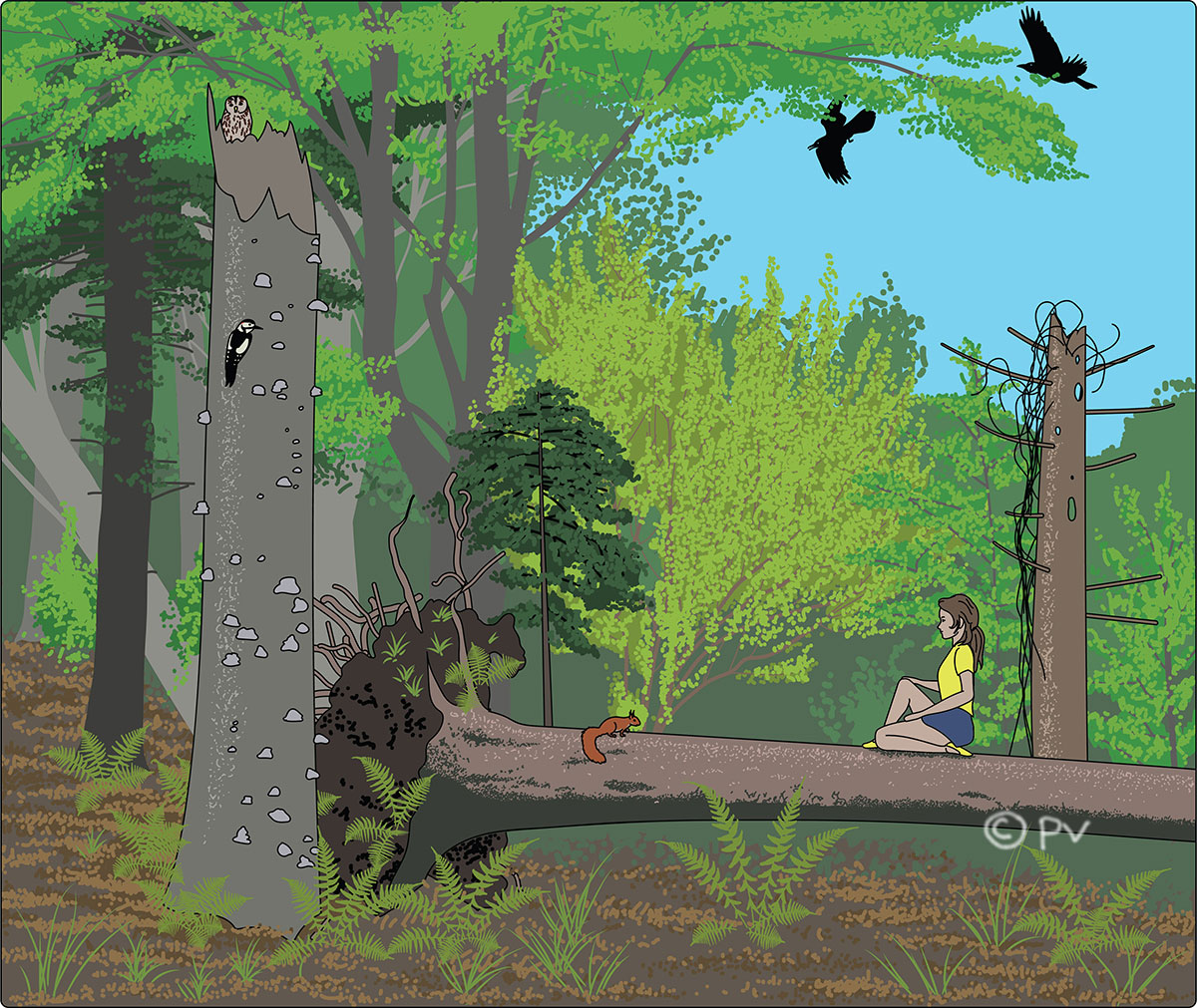 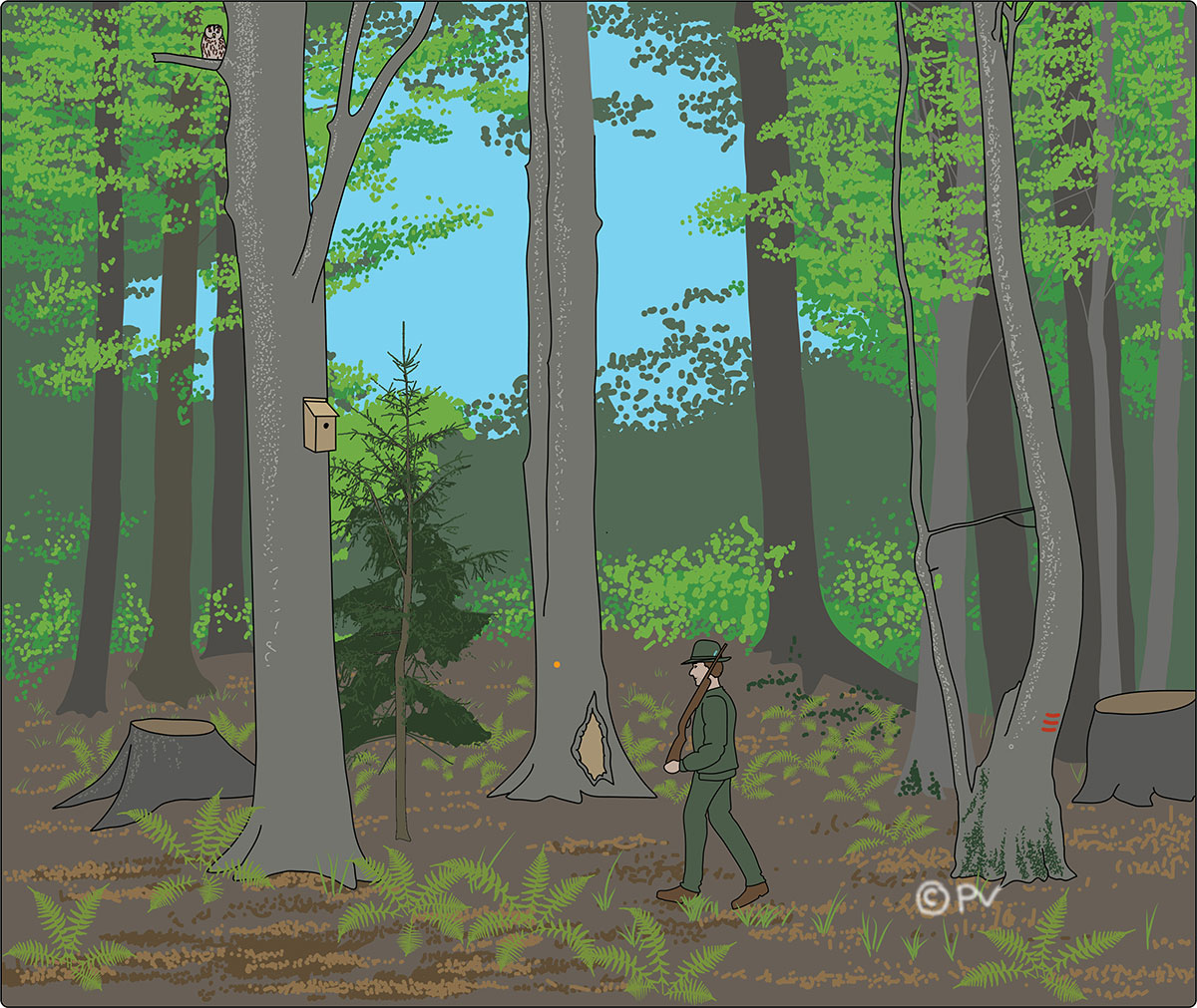 Do you see the difference between a natural and a managed forest? The presence of dead trees in the natural forest is most obvious, but there are other, more subtle differences as well.
With these drawings, I like to show not only the differences in the forest itself but also the different attitudes of the humans in the forest. In the natural forest, we are mere visitors while there is a hunter walking through the managed forest, who can have a real impact on his surroundings.

I made these drawings to illustrate how hydropower plants change rivers, and how this affects us. In short, dams slow the current and interrupt both the migration of fish and the flow of sediments. Eventually, underwater plants are largely replaced by algae, rivers become deeper and even the groundwater level is affected. Decomposing organic sediment in hydropower lakes releases greenhouse gasses.

Sometimes, hydropower lakes are advertised as an opportunity for tourism. In practice, fluctuating water levels, algae blooms and unpredictable currents mean that access is often prohibited.

I initially made these drawings because I think it is important to tell the whole story, not just the propaganda from energy companies. Later on, some were used in an education campaign by Za Savo. 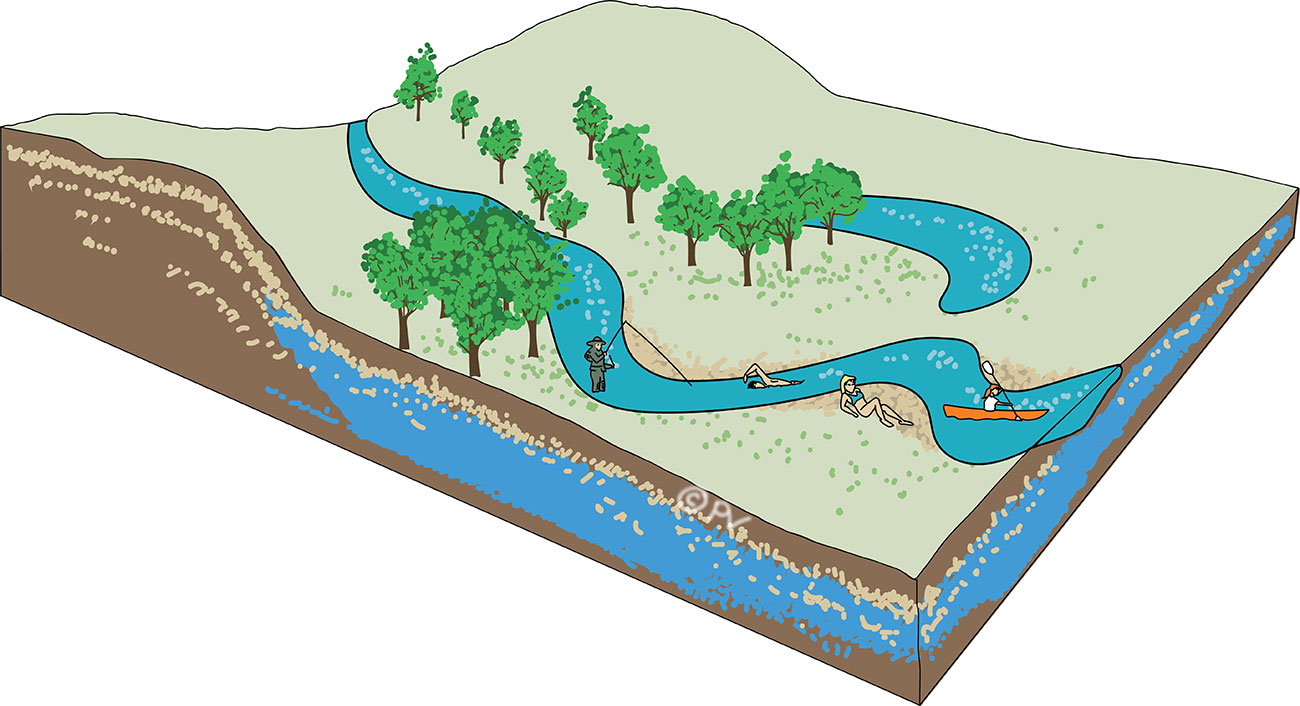 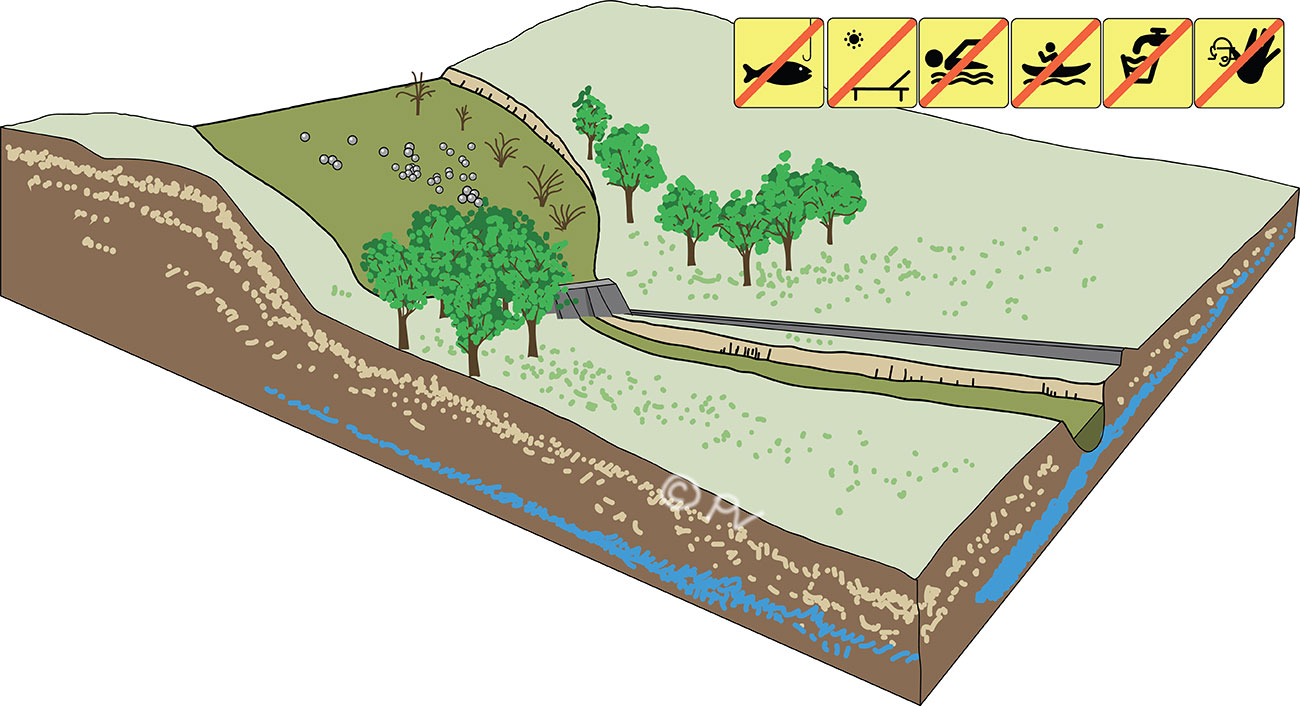 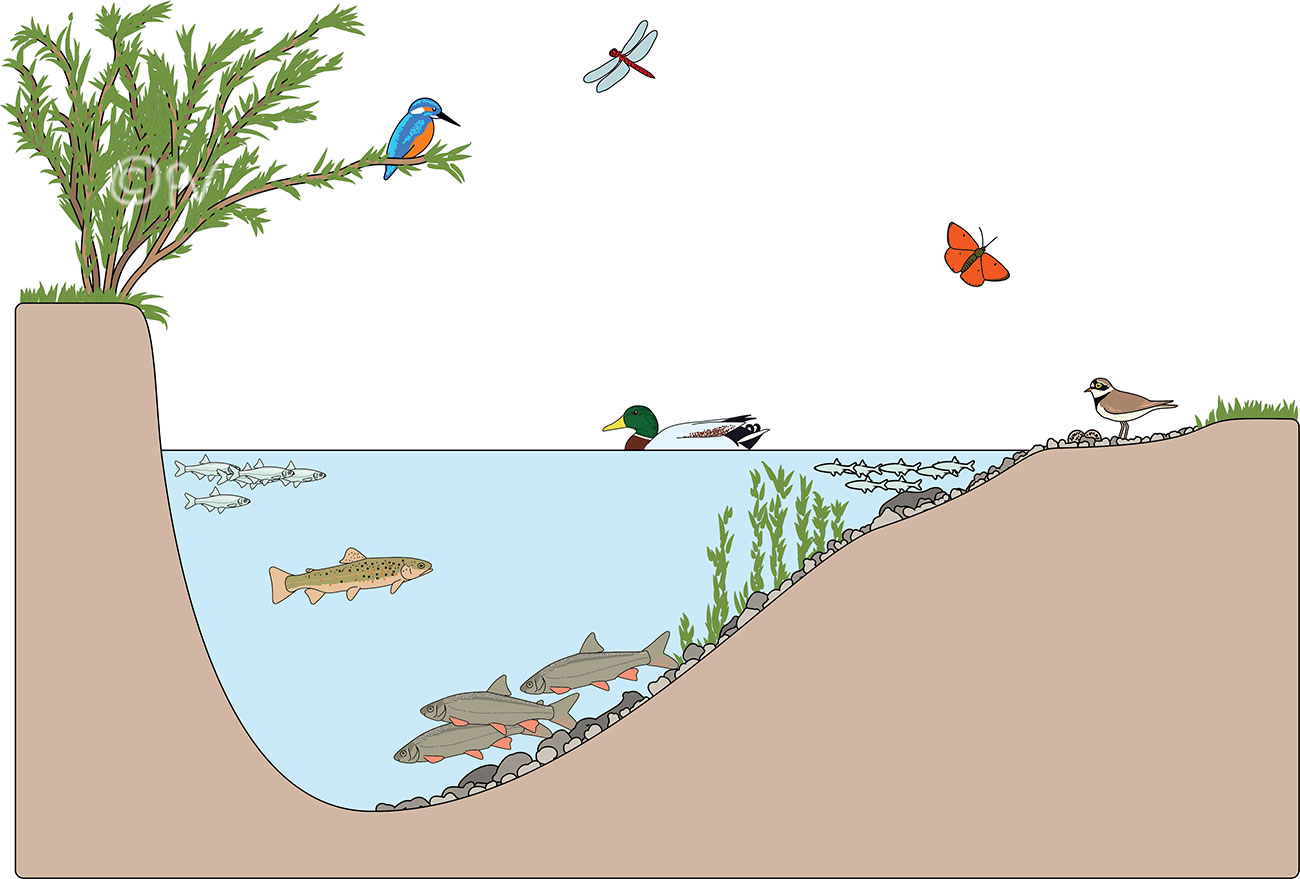 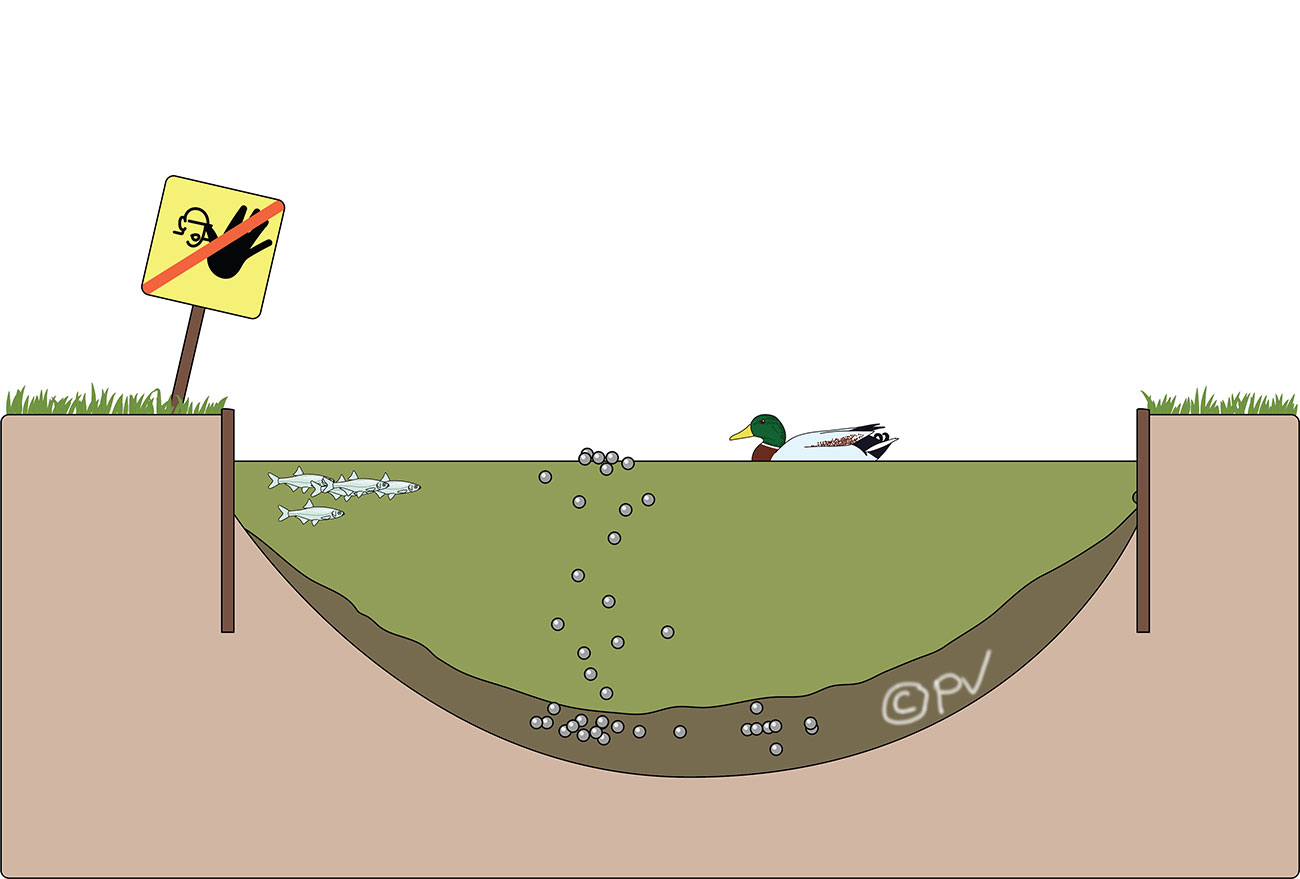 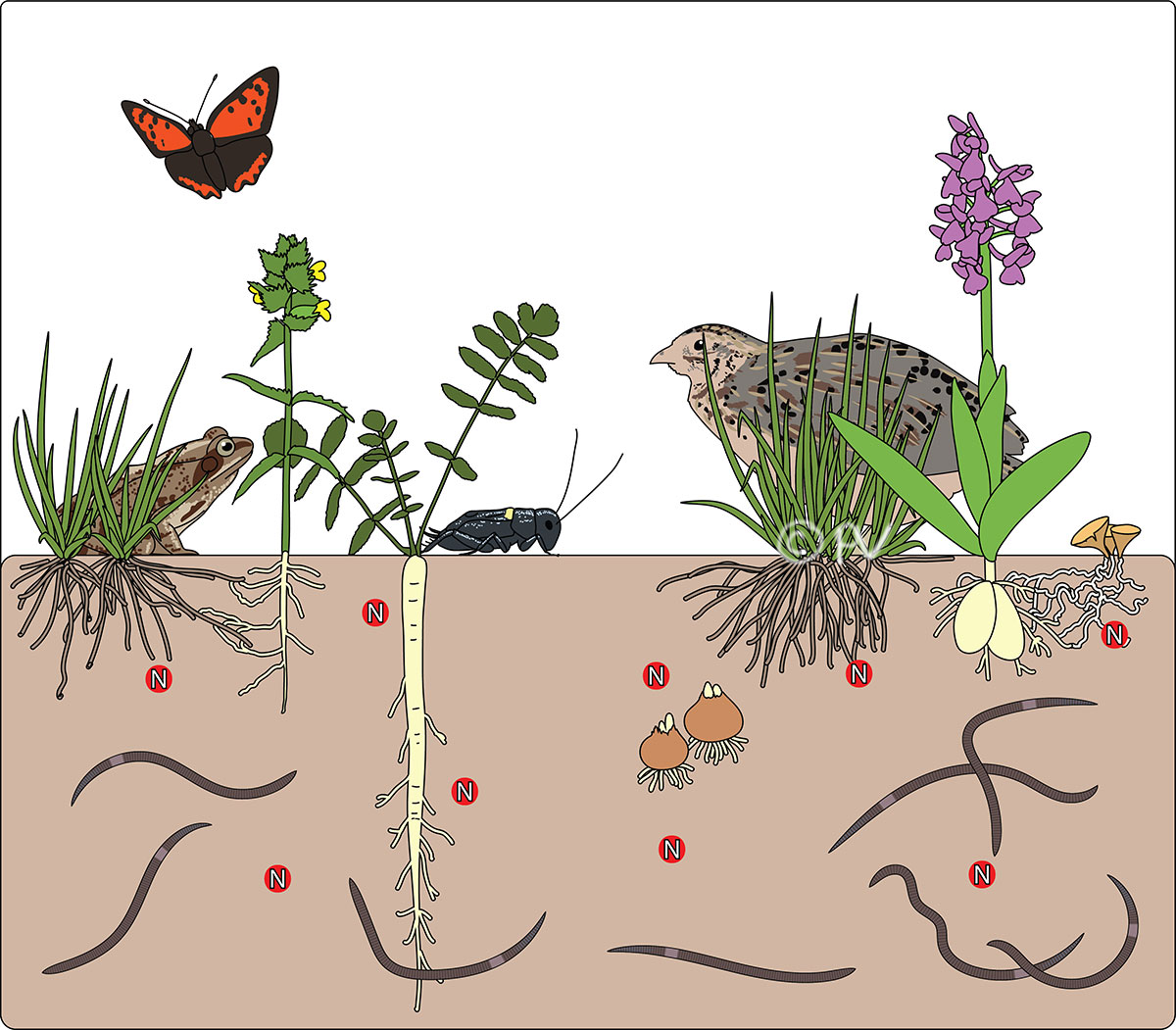 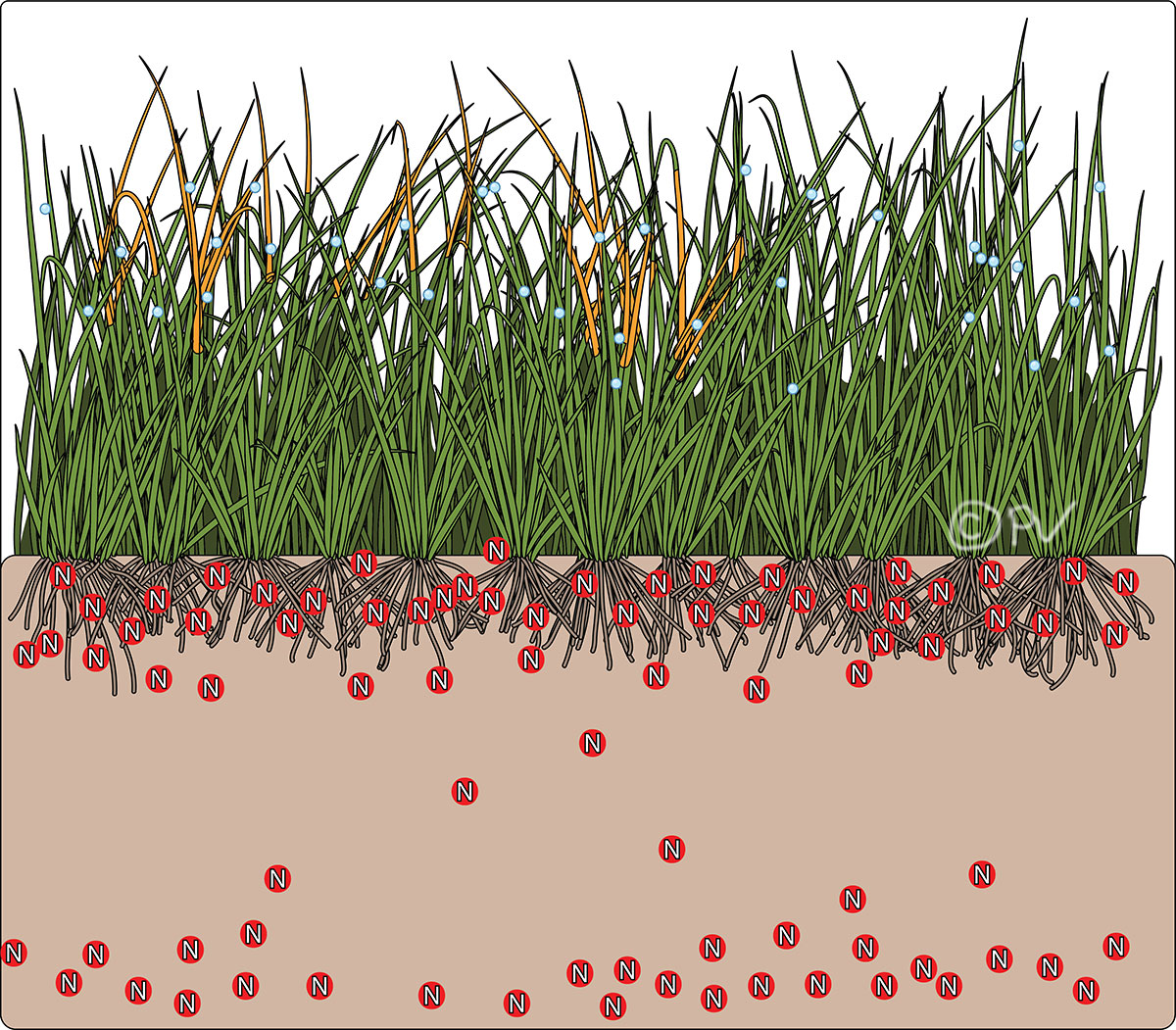 In these pictures, I show the effect of fertilizer, which I depict as red circles with the letter N ( from Nitrate). With little or no fertilizer, there is a highly diverse grassland community with many specialized plants and animals. This changes when fertilizer is added: then, the fastest growing grass outcompetes all other plants. Such a fertilized meadow is no longer a living space for many different animals …

The picture with the cow shows where excess fertilizer comes from: European cows are fed with plant-based food, which is grown in South America, shown as green figures in the shape of the continent. On the other end, milk is exported. But the cow-faeces, with the South American nutrients inside, stays behind in Europe …

When Common carp are released in a pond, they start a chain reaction which alters the entire underwater environment. By eating plants and stirring up sediment, they create ideal conditions for algae: the water becomes turbid and green. This release of nutrients from the sediment and from the eaten plants in the form of fish faeces is called “internal eutrophication”.

These drawings are used by municipality De Bilt (NL) to explain why they remove carp. 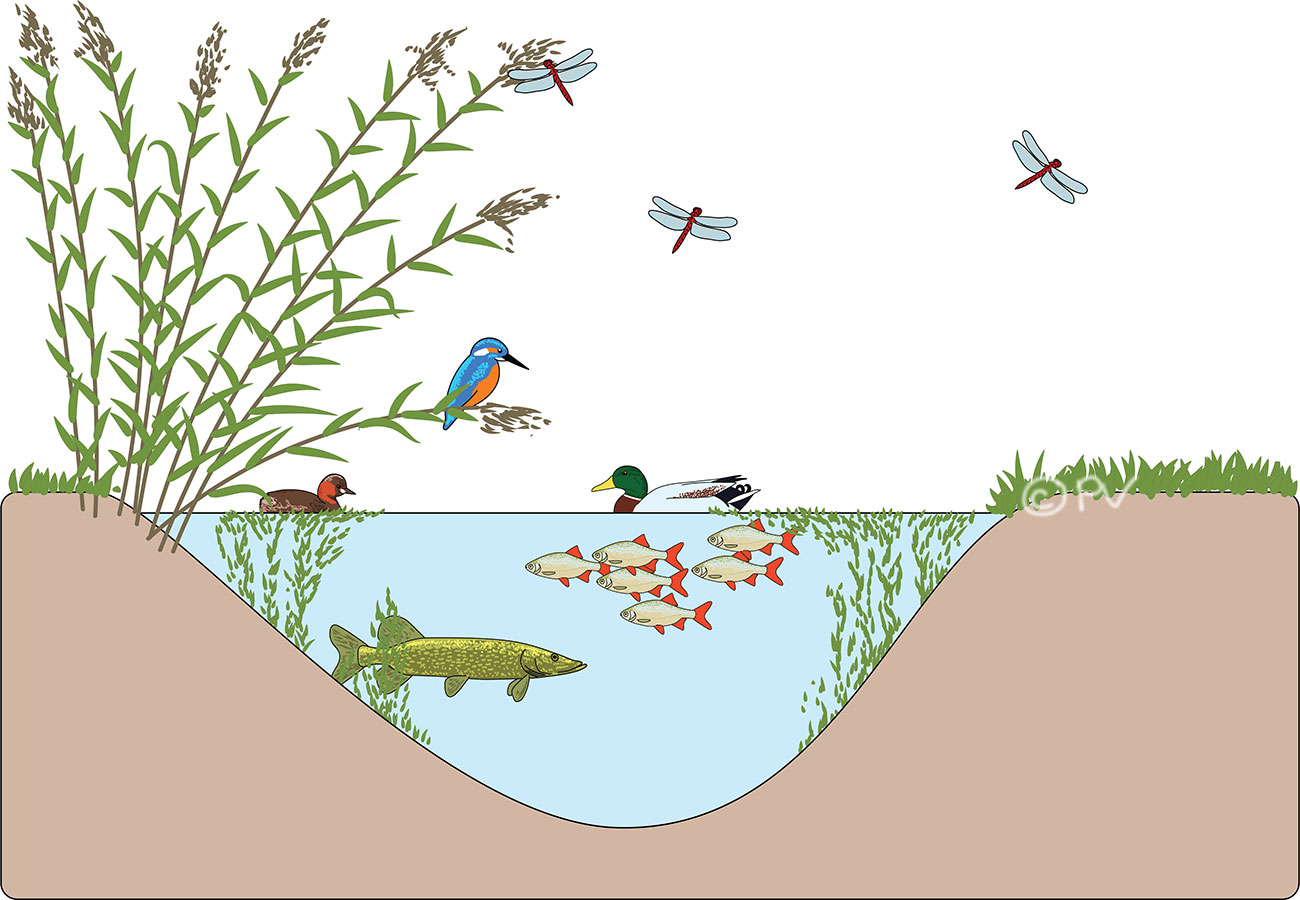 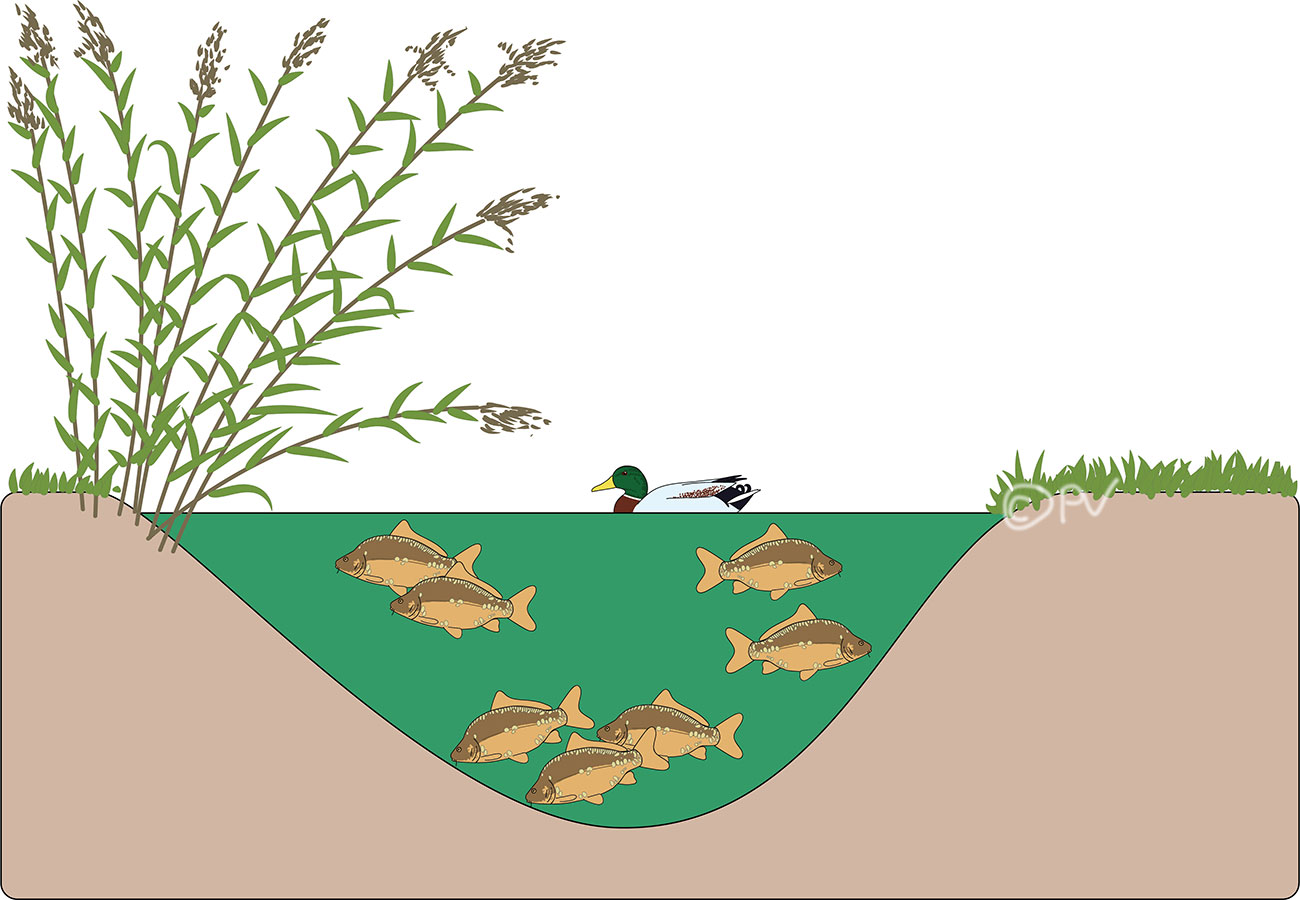